Traditionally baked on ANZAC DAY are the ANZAC biscuits, an oat biscuits that is easy to make and very scrumptious. In fact, it's one of my daughter's favourite biscuits also because she can almost make them by herself. You basically  just need cup - and spoon measurements for this recipe and then you stir the dry with the wet ingredients together. Easy! I still melt the butter and golden syrup on the stove and let her watch as I am a bit wary about flames and heat. Other than that it's an easy recipe to whip up in a few minutes.

I have also added caramel to the mix to create this caramel ANZAC biscuit, just for a little twist but if you want the traditional way just omit them. 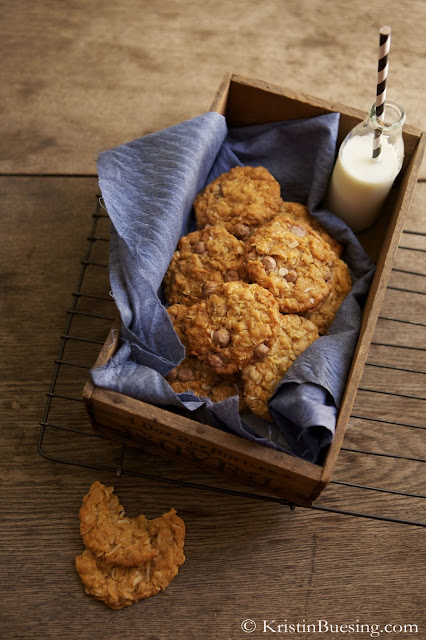 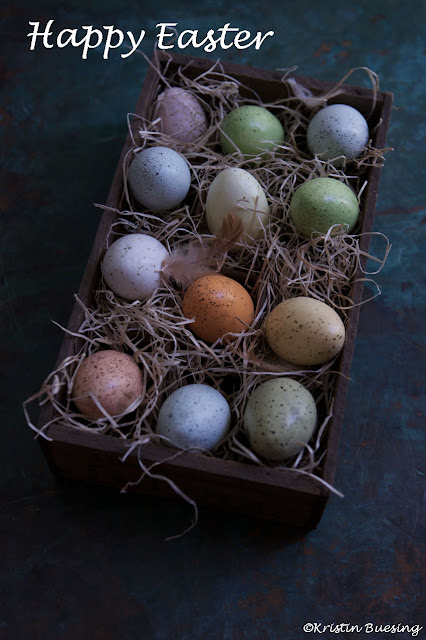 Happy Easter to all of you. Have a wonderful break and lots of yummy food!
Posted by Kristin at 28.3.13 1 comment: 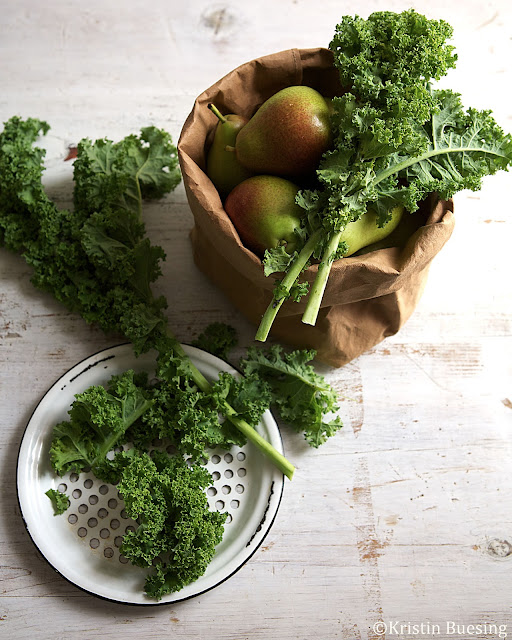 Today was a whooping nice day, it felt like 30˚C and it also happened to be a Sunday - yippee!
That's definitely beach weather we thought and started early, or at least tried, to get to the beach. We weren't alone and by the time we got there, it was already quite busy. Never mind, with coffee and ice- cream in hand we walked through the sand and found a nice spot.
The thing with the Australian sun is though, I can never bear her for long. So, after two hours we packed our stuff and strolled through Surry Hills, were they had a music festival of some sort. Bands played at different shops, cafes and along Crown Street to entertain the passers by.

On Crown Street is also a very nice grocery store/deli where I bought some nice ingredients for our dinner. Kale, pears, smoked bacon and sour cream shortcrust pastry from Careme. If you haven't come across these guys from the Barossa, you must. Of course, to make shortcrust pastry yourself is not difficult but if you short for time or can't be bothered, then try Careme. 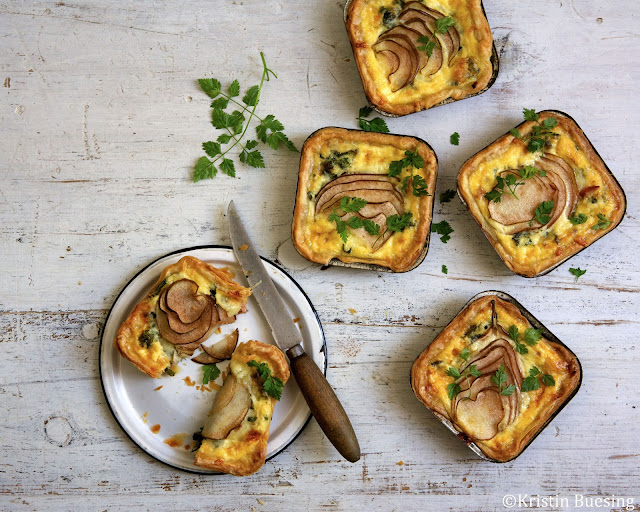 The combination of kale and pear works really well, and the bacon and Gruyere give a lot of
yummy savoury flavour. The sour cream in the pastry makes it so flaky, it's more like puff pastry.
Delish!

Preheat oven to 200˚C. Roll pastry out on a lightly floured surface, then cut into six squares so that they are large enough to line the tin base and sides. Cut away any excess pastry from the edges. Prick bases with a fork a few times. Chill for 15 minutes.
Put tarts on a baking tray. Line the tarts with baking paper and fill with pastry weights or uncooked lentils. Blind bake in the oven for 10 minutes, then remove paper and weights and bake for a further 5 minutes or until pastry is golden. Remove and set aside.
For the filling chopped bacon and cook in a frying pan over low heat until bacon is brown and crisp. Add chopped kale and ½ cup of water and cook over medium heat until kale is soft and water has completely evaporated. Set aside to cool.
Once cooled sprinkle bacon and kale over the six bases, followed by the grated Gruyere cheese.
Whisk together eggs, cream and milk, then carefully pour the egg mixture over the bacon.
Finely slice the pear with a mandolin and place a few slices on top of each filling.
Return quiches to the hot oven for 20-25 minutes or until golden and set.
Serve with a green salad.

At a restaurant I once had sago pudding inspired by the Malayan sago gula melaka. Whenever my grandmother would make Rote Gruetze, a berry dessert from North Germany, she would use sago to thicken the sauce. In this dessert sago itself becomes the main ingredient which I really like. After cooking the sago you need to rinse it under cold running water to remove the starch which makes it very sticky, but let me assure you, the beaten egg white makes all light and fluffy again. The sago has no sugar in it as the sweetness completely comes from the syrup and ice-cream. The coconut milk adds a refreshing note to it and prevents it from becoming too sweet.

My mother-in-law once gave me little Buddha moulds which I think are fun to make the sago pudding in. I made this dessert for German friends visiting Sydney as it is nothing you would necessarily come across in Europe and it's also great to prepare ahead. 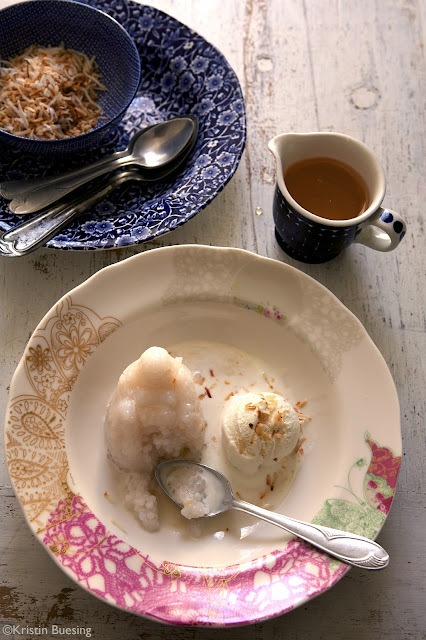 
Bring a large pan of water to the boil and when boiling, add sago. Stir frequently as the water returns to the boil, to avoid them sticking. The sago will float to the surface and be transparent when cooked. Strain and rinse with cold water a couple of times to remove the starch.
In a clean bowl beat the egg white until soft peaks form. Add sago, stir to combine and pour into four jelly moulds. Cover with cling film and refrigerate until set, about 1 hour.
Stir palm sugar and water over medium heat until sugar has dissolved. Stir in white sugar. Stir until completely dissolved. Add ginger and simmer for about 5 minutes, or until syrup has thickened slightly. Strain through a fine sieve into a pouring jug and refrigerate for approximately 1 hour.
Carefully turn sago puddings out onto plates and serve topped with a little of the coconut milk and syrup, accompanied by the coconut ice-cream and toasted coconut.

For this you need an ice-cream maker.
(makes approx 4 cups)


Place coconut cream and both milks into a large jug and refrigerate until cold (at least an hour).
Pour mixture into an ice-cream maker and churn until finished. Put in a freezer-safe container and freeze for up to two week.

Recently I made apricot chicken for Sunday dinner and it proved to be quite popular.
It's such an easy recipe, nothing fancy but yummy. However, it has nothing to do with the old-fashioned recipe that uses French onion soup powder and canned apricots. I first used fresh apricots which work as well but dried ones are more my taste and available all year round.

I love the sweetness through the dried apricots and the crunch through roasted almonds.
Ras el Hanout, a Moroccan spice blend adds a nice warmth to it, perfect for autumn weather (that inspiration I took from Janelle Bloom's cookbook). Ras el hanout translates as "head of the shop" and implies the blend uses only the best spices the seller has to offer. Depending on where its purchased the blend of spices will vary though. 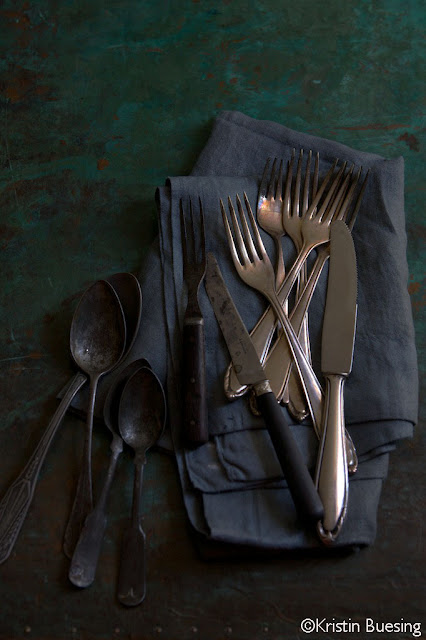 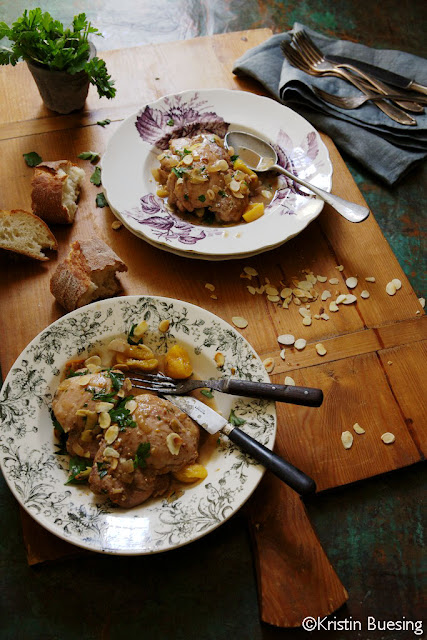 Heat oil in a large casserole dish and fry the chicken on each side until golden. Remove from casserole and set aside. Saute onion and garlic on medium-low heat until softened. Add spice mix and fry until fragrant. Add stock, apricot nectar, apricots and chicken thighs and bring to the boil. Turn down heat to a simmer and cook, covered, for 20-25 minutes or until chicken pieces are cooked through. Remove chicken thighs and boil sauce until slightly reduced. Add chicken and season.
Serve sprinkled with almonds and parsley.

Serve with brown rice or couscous.

I am not sure why I thought of making a vegan banana cake as so far I have been making a very traditional one and it always turned out nicely. But then there is so much talk about the so-
called superfoods which I liked to try in a cake. There are some superfoods I would  not touch, no matter how healthy they might be but chia seeds have become one of our favourite seeds in our family. They are so versatile and don't really taste like much but sprinkled on a smoothie it adds a nice crunch to it. Don't let them sit too long though or they become soggy and starting to gel. Funny seed that is.

The chia and almond spread is from the health food section at Coles which seems to be widely available. I bought the spread because it somehow attracted me without knowing what I am going to do with it in the first place.
It actually works well instead of peanut butter but also adds nice flavour to the cake. 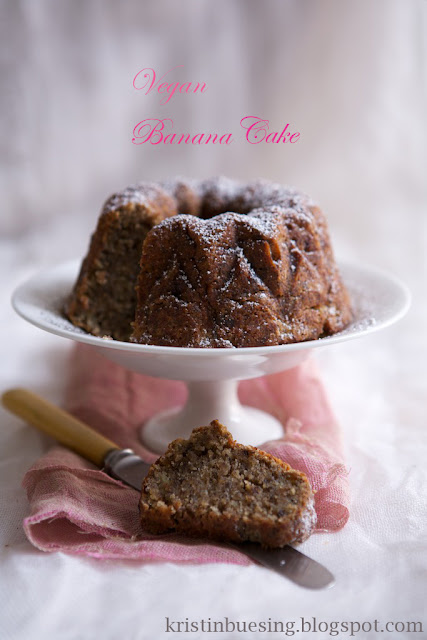